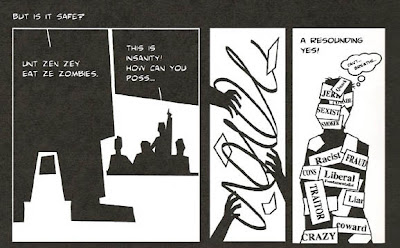 A few years back Mark and I produced a comic about giant zombies titled The Tall and the Dead, a mostly comedic tale of the Zombie Apocalypse featuring undead of ungodly proportions. Mixed into the jokes were a number of serious observations about the world. We are, after all, students of the Romero School of Zombie. The above panel is such an observation. Its topic is politics. In three panels, we illustrated a basic tactic in politics as old as society: control the language and you control thought. Control thought and you control people.

Don't like a rival? Call him or her a name and burden them with the weight of history. Stink them up with inference. Bloody their hands with the actions of others. Facts don't count, remember. We're talking politics. Repeat it enough and people will believe it.

Don't like a group of people? Use a label that invokes and evokes emotion. Better yet, take a loner's actions and wonder aloud within earshot of a live microphone. Wonder how many others are just like (insert name here). Suddenly, this person's name becomes a deadly germ. People will smile while gladly hacking off a healthy limb to avoid the slightest contamination. Guilt by implied association. Say it loud enough and people will remember it.

Will someone please invent a rehab program for the American political system so we are all free of its addiction to coercive labels and its unauthorized conscription of the language? Is that so much to ask? Is it?

I'm Sam Girdich and I approve this message.