Warner Brothers and DC are trying hard to make up for lost time and a much larger quality gap regarding the big screen adaptations of their characters. High hopes and MILLION$ of dollars are hanging on next year’s Batman V Superman: Dawn of Justice film. A large chunk of the hype is not around the titular heroes however, but for a certain amazon whose fans for years have yearned to see in a movie. The portrayal of Wonder Woman will make or break this film for many. Me? I just want a GOOD MOVIE. Entertain me while keeping the story’s internal logic consistent and fleshing out solid characters and I will hand over my money. In that spirit I given you one of several openings I envision for the announced 2017 release of the Wonder Woman film. Enjoy!

EXT. A LARGE CITY PARK ON A BRIGHT, SUNNY FALL AFTERNOON. A SERIES OF CUTS:

We see scenes of people, but sometimes the view becomes blurry. Couples read books, listen to music while sunning, or text who knows who while completely NOT interacting with the person right next to them. Parents play with children. Elderly couples walk hand in hand. The view finally becomes completely blurry.

The shot changes to a very old man (ARTY). He is holding his thick glasses in one hand while rubbing his blue eyes with his other. His cane leans against his bench. We were watching the park and its users through his eyes. He is dressed in clean but old and slightly too large clothes showing he has had, and worn, these items for some time. With his glasses returned to his face he continues people watching. We now watch him watching others. A pattern emerges. He is watching couples or families while he sits all alone. He absentmindedly plays with his wedding ring the entire time but that action is NOT focused on. Let the Audience notice it or not. A tall person walks past him blocking his view for an instant. His attention captured, he turns toward the person.

It is a woman. She is very tall, confident, and sporting long black hair. He watches her with some interest as she walks away without looking back. She looks familiar. She’s gone in a few seconds.

Arty looks down at the sound. A German, WWII era hand grenade (a potato masher) has just landed at his feet. No time to react. IT EXPLODES!

The flash and bang pass, but the smoke does not. Someone in the smoke is coughing. A man screams in pain somewhere off screen. Suddenly a young US soldier circa WW II runs into view thinning the smoke. We are now in a dark forest in Germany. The solider is wearing a mobile communication pack. He drops behind a tree as gun fire and more explosions rock the area around him. Panicking he pulls his pack off and reaches for the receiver.

CUT TO CLOSE UP: The unit is damaged. The wires to the hand piece are split.

He immediately sets to trying to repair the wires. He bites at the thick wire coating to expose a new length of wire. The explosions are getting louder. Soldiers run past him. He twists the two pieces of exposed wire together bridging the gap. A new mechanical sound reaches his ears.

THE OPPOSITE SIDE OF THE TREE IS BEHIND

He slowly peaks around the tree.

Arty’s POV. We see he is only yards in the forest. German tanks approach the tree line. He retreats behind the tree and tries the unit. Bullets fly past him.

Arty is hurled through the air. He lands on his own equipment.

Arty is dazed and bleeding badly from his ears and nose. Several seconds pass. A large, blurry figure leans over him. He reaches for his gun half unconscious. A woman’s dirty, blood stained effortlessly hand pushes his arm down.

CUT TO. SIDE VIEW.

You are badly wounded and will likely die. (She speaks calmly and directly.)

Close your eyes. Find what peace you can. I will hold off the Germans while your men regroup.

Arty stares, gasping for air, at this impossible person who just pronounced his death. She looks closer at him. He looks very young.

Close your eyes. Think of your home.

She stands and walks off. She was carrying a bloody sword in her other hand the entire time. She is dressed for battle. Arty watches her transfixed. She suddenly runs off toward the Germans far faster than any human can run. He follows her path, his life still draining. German soldiers fire at her. She blocks with her bracers easily deflecting some back toward the soldiers. She raises her sword and dives into them.

The view switches to Arty’s face. We see the shock in his eyes match the sound of her battle cries and screams of the Germans. She is literally tearing through them and we see it reflected in his face.

Screams and rending metal. (She can tear apart tanks, lest we forget.)

He looks away and skyward.

It is a clear blue day. Blue just like his eyes. The sounds are fading, calming as his eyes close.

He blinks his eyes open. Several people are standing over him discussing what to do while one person calls 911.

The crowd parts allowing the same woman Arty was watching to approach. It is Diana in civilian clothes. She looks him over and stops at his eyes. They look at each other for a second. She smiles.

You can get up.

She easily but carefully helps Arty back to his feet. A siren wails in the background. The bystanders walk away. She helps him back onto the bench.

Where… have you been?

I had to leave.

But I am back now.

CUT TO: CLOSE UP ON ARTY’S HANDS. THEY ARE SHAKING. SOMETHING IS VERY WRONG WITH HIM.

Stay with me this time?

You have my word.

Is this fan fiction? Honestly, I have no idea. I don’t read her book, though I have sampled it over the years. I simply haven’t found a writer (yet) who brings that something to the character that hooks me. It is the same reason I don’t read Green Lantern. Both are awesome, long-lived and well-loved characters I’d like to read but don’t. I never read Daredevil, for example, until I found Ann Nocenti’s run. She brought a something to the book that blew me away. Maybe it is the lack of finding that something? If I know me, and I do, then I may be on to something there. I want more ‘Ann Nocenti moments’ in my comic reading life and Diana is one of several characters I want to experience that with. To me, she is dichotomy in motion. The most obvious being the warrior archetype and the healer archetype if I may fax philosophic. There are others, as well. In other words, she has conflicting natures within her (like you and I) that could be used to examine what it means to be human. Let me stop now before I re-hash the millions of words that have been spilled on the psychology of literary characters. I’m just saying I’ve always thought there was more to her character and if I can’t find what I am looking for then I will create it.

Posted by Sam Girdich at Thursday, January 22, 2015 No comments:

This Interview Would Have Been Bullshit

HAD Matt Page agreed to an interview, this would have been the format. I sent Matt a couple of requests via YouTube and so far never haven’t back. No prob! I know the folks I hope to interview (like Tsoukalos) are busy and must pick and choose how they spend their time. I get that fact and accept it 100%. So enjoy the following Once and Future Interview and insert your own answers after you check out Matt’s work. It is very funny and very well made. Enjoy!

Matt,
Thank you in advance for taking the time to read my email.
My name is Sam Girdich. I am a writer, life-long martial artist, and co-founder of the sequential art & graphic design project Strongarm Labs. I would love to interview you for my blog!


I understand time your time is valuable so my interview format is designed to be quick and easy. I pose three main questions with one follow-up question each if clarification is warranted. And that’s it! I do not edit your replies in any way. Not a word is touched. I send you a full copy of the interview pre-posting so you see exactly what the readers will read and give you the final word to publish it or not. My goal simply is to have fun and provide an avenue for myself and others to learn something new.


Before you read your three questions below, I invite you to visit my blog Lab Work to peruse my posts and writings, as well as our Strongarm Labs page for some of our work. I want you to know who I am and how I think so you know you can be comfortable having your name on my site. I’ll wait here while you go check me out…


You’re back! Excellent. Here we go. I made these two images for the intro. 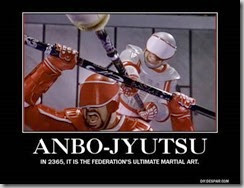 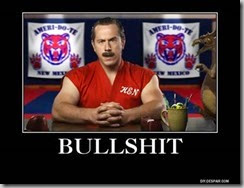 In the early winter of 2013 I was wandering around YouTube when I stumbled into a red gi wearing, mustached martial arts instructor named Master Ken. He was proclaiming loudly -and in stunning detail- that every form of martial arts in the world except his own Ameri-Do-Te style was unequivocally, “Bullshit!” I was hooked. More than hooked, I was impressed and laughing so hard I took a two-day break from Master Ken and his students. No joke.


My new favorite instructor is the creation of actor/writer Matt Page, who also stars as Master Ken in the hit YouTube comedy web series Enter the Dojo. Now in its third season, Enter the Dojo is a mockumentary following Master Ken and his oddball students in his New Mexico dojo. Imagine the irreverent, character driven comedy of The Office and drop it into a martial arts school. Matt also delights viewers with thick, frothy bursts of instruction in his Master Ken’s Privates videos plus much, much more.
Enter the Dojo is produced through Riffraff New Media, a multimedia production company co-founded by Matt. Click on the link and check out samples of their work. You’ll recognize a familiar setting if you are a fan of the show. Matt has a long history of acting and is himself an accomplished martial artist in Kenpo karate with two black belts.
Enough intro. Let’s talk to Matt!


1. Thank you again for your time, Matt. Tell us about the origin of the series and what was it about the concept that convinced you it warranted your time and resources.

2. Enter the Dojo premieres as a web series in August 2011 and by 2014 you are roasting martial arts legends and giving seminars in the UK. That speaks to the quality of the series’ acting and writing, but was it planned? In other words, did you early on envision the possibility of expanding the production to these venues or did it grow organically?


3. How has the success of the series affected your acting career?

Posted by Sam Girdich at Wednesday, January 14, 2015 No comments: