A 500-Year-Old Rhythmic Rump is Music to the Ears

This is one of those stories that makes me ask:

Consider a moment this baritone bottom, this dynamic derrière, this syncopating seat, this tush with a tempo, this not-so flat fundament.

First some background. Sometime between 1490 and 1510, a wildly imaginative painter by the name of Hieronymus Bosch created a work entitled The Garden of Earthly Delights. Perhaps you've seen it before. 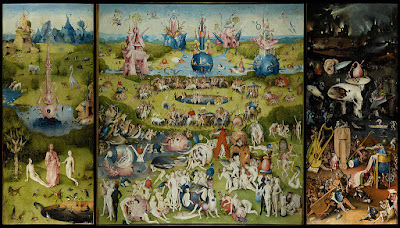 Most sites I found describe the work and the painter as up for interpretation. Little primary evidence has been found to date explaining why it was created or what it meant to its creator. Not much is known of the talent behind the work. I say talent because the detail and symbolism, found or implied, are without question. It is a stunning example of his work.

Let's take a closer look at it.


Did you catch 2:34? Look for the person pointing to the sheet music adorned ass belonging to a literally tortured soul. Who knows how many people over the centuries saw it without setting out to spread the word of what two cheeks plus ink sounded like. We'll never know, but at least we can now all hum the bum tune thanks to Amelia Hamrick!


Are you surprised to learn there's a cult following of this almost completely unknown piece of ass, er, music? Not a chance in hell you are. You've met humans and know about the internet. Or maybe not! This was all new to me and I LOOK for stuff like this. Want a fleshed-out version? Here you go.

And what a disservice would I do to you, gentle reader, if I did not share a song completely unrelated to the butt but sharing some thematic bonds.


(XTC is one of those influences you discover in your late teens or early twenties that gets you moving down a thinking path, like the works of Robert Anton Wilson or Robert Heinlein or Ayn Rand or Aldous Huxley or Upton Sinclair or Marillion fronted by Fish or the gold plated records carried by the Voyager probes or why Hubble invented the electric outlet or why potato chip bags are filled with nitrogen or...well, that's all another blog for another day.)

So, is this an important thing? Will it help grow more crops? Build shelters? Cure disease?

It is an example of what happens when observation (the act of paying attention or opening your damn eyes) meets a willingness to ask "what if" questions. That is the definition of innovation. I don't know if Amelia is the first to do what she did, but I didn't find records of anyone else doing it first. Therein is found the importance: WHAT THE HELL ELSE ARE WE NOT SEEING! What ideas have been waiting with an epic set of blue balls to be released? What ancient puzzles are staring at us with pallid eyes, gathering dust and despair from the fear of dying alone?

Need more metaphors? I doubt it. You get it. You don't need something tattooed on your ass for it to sink in.

Be well, gentle reader. Keep those eyes and that mind open.