The sun drifts untouched across its sky as birds fly beneath it unaware or uncaring of the changed world beneath them. Morning has again followed night. Survival has again followed fighting. Another day alive on a world with millions of pale, putrid eyes searching without pause for the few clear ones left.

How many more days like this? you wonder. The massive horde of undead has shambled past you for over two hours. You listen to every faltering step and scratchy moan trying to guess if your hiding spot was discovered. It sounds like the flow is thinning, but you don’t dare look. One misplaced footfall would call down a rending flood of tooth and nail. A year? Five years? Twenty? One day old age will catch you, even if the dead don’t. More likely they will team up with injury and sickness to finally end you. Either way, death is all that awaits you at the end of your struggles. A small chuckle escapes you. It wasn’t waiting for me before all this? That much, at least, hadn’t changed. It was cold comfort, but some comfort is always better than none. Yet, the thought behind it all would not be silenced: what now, what tomorrow? Survival is not living. Drawing breath was not the same as being alive.

Your enemy is unburdened by such thoughts. Their philosophy is simple and enviously complete:  Consume or Convert. It’s the clarity one would expect from the simplistic strength of a virus. It was a virus, right? You heard that from the early reports of the first outbreak. Seemed logical enough at the time, but it yielded so many unanswered questions afterward it was an explanation almost not worth having at all. A virus from where, for starters. And why? Most people you encountered (those who didn’t covet your provisions like the dead coveted your body) didn’t care about the how.

“Cat’s out of the bag. Too late to care about where the bag came from.” they said.

Maybe. But the knowing, to you, of ‘how’ was important. The balance of how/why you could not shake. Something so big should have an equally large why, right?

Right?
Posted by Sam Girdich at Wednesday, April 19, 2017 No comments:

My Everyday On This Planet. 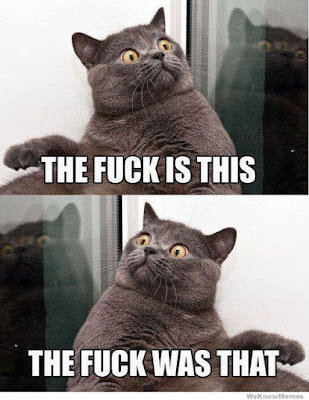 My apologies if the 15th century Germanic generic term for 'repetitive movement' originally used in reference to farming (in which one plants seeds) offends. I have no control over the evolution of human symbolism. I do, however stand by it's usage in this meme as it captures the sentiment in my mind perfectly. If you are of a gentle demeanor and simply cannot stomach the energy which only primal vulgarities can carry then I offer this as a pale substitute:
What the hell is going? What the hell just happened?

Not really the same, is it? I like the original. It is raw. It is real. Now, I don't talk like this in my daily life but I do THINK like this at times. I like words which carry meaning and vitality because that's what words are supposed to do! They are our means of sharing the Life Experience, and there isn't anything more raw or real than that. Art and poetry can express the same feeling but only in hindsight. The heat of the moment demands the use of the tools in hand. So, when life takes us by surprise we fight back with F-bombs. See the relationship? And it is nothing new at all. Even the Ancient Egyptians had different forms of writing/scripts, for different situations. They had Hieroglyphs for important circumstances or people, and Demotic for the common people and common daily life.

So what's the point? Nothing at all! I'm baffled and befuddled today. I am having a confusing day worth throwing words at and sharing with the rest of the village. I'm having a classical human day, which is in fact, the only kind of day any of us can have no matter that form it takes.

Be well. Be seeing you,

Email ThisBlogThis!Share to TwitterShare to FacebookShare to Pinterest
Labels: comedy, confused, frustration. Thank You, human folly, just what the hell happened to day, meaning of life

Welcome to Night Vale, the All Hail tour 2017 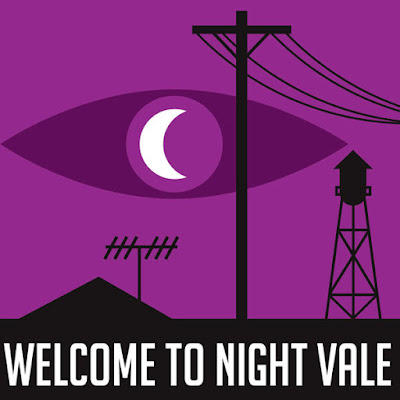 Running since 2012, the comedic yet sometimes thematically terrifying podcast Welcome to Night Vale is a witty mash of Lovecraftian entities, true to life conspiracies, and small town Americana. The happenings and history of the town are relayed by the mostly accurate community radio DJ  Cecil (played by actor Cecil Baldwin). I’ve only recently discovered the tapestry that is the desert town of Night Vale, and I like it. The town is full of secrets and twisted mundanities skillfully brought to life and light by the writers and performers, and as such I would be committing a grave disservice by “explaining it all”. Plus, the Night Vale City Council made it abundantly clear that I would find myself in the abandoned mine shaft outside of town or on a one-way trip to the Dog Park if I even thought about it. I mean literally even thought about it. All Hail the Glow Cloud and its rain of dead animals!

I like Welcome to Night Vale. It is the type of story and performance I wish I had thought of, yet glad I did not because I get to lazily sit back and enjoy it. Take a chance. See if it appeals to you. Start your own journey of ancient powers, high school bake sales, and deadly jazz festivals.

But before you do, a quick review of the live performance I recently had the pleasure of attending at The Egg in Albany, NY. Each tour is different (this is far from their first) so I am NOT GOING TO GIVE SPOILERS.

I was definitely a noob in a sea of longtime fans. Some attendees came dressed in character costumes (I say that counts as cosplay) while others brought homemade props.

The musical guest for this year’s tour is Erin McKeown. Click here for her SITE. She engaged the audience, has a good voice, and best of all the talent to back it all up. I liked her tracks You Cannot and this other one about finding your voice as an artist whose title I did not catch! ARGH! I’ll track it down, not to worry.

The performance, done in the style of a live radio drama, was solid. Seeing Cecil crack himself up at one point was fun. Watching a performer get so deep into a role that they catch themselves off guard is always a pleasure. Several show regulars, such as co-creator and writer Joseph Fink, were on hand. I super really truly want to go into greater details about the show and its new information but I don’t want to release spoilers into the world. That would be like poking open a spider’s egg sack onto the head of a sleeping loved one. Sure, it is good for a laugh but the aftermath can never be undone. I guess it is not a spoiler to say the show focuses on the Glow Cloud. It is implied in the title after all. Can I hint that we learn things about the Glow Cloud? Can I hint the info comes from the Glow Cloud itself? I’ve said too much. I just saw a Sheriff’s Secret Police cruiser slow down in front of my house. Not to worry, however. If you are a fan and cannot make it to a live show, or if you become a fan and want to get up to speed, a tour video will be released. Meg said so and I trust Meg no matter what she says.

I’m not trying to be cryptic, honestly. The detail and life breathed into the show by the cast and actors is great and wide. Handing you more on a silver platter would ruin it. And cost me a lot of money. Silver is not cheap.

The only shadow to fall upon the night came in the form of social commentary. It was a bit thick a few times which pulled me back into the real world. Everyone has a personal bubble when it comes to entertainment. When an unexpected needle comes into contact with it, the sudden ‘pop’ pushes us back into the reality we’re trying to take a little break from. Sometimes the needle is a gap in story logic, poor dialogue, or in my case heavy social commentary in any form. It only happened a few times in an overwhelmingly enjoyable experience, to be very clear. That’s the only reason they stood out. I would will take the opportunity to see the cast perform again. Hell, I sprang for a t-shirt!

Bottom line: I had a good time. I would go again. I look forward to the episodes (and perhaps the books) I haven’t listened to yet. I really want to go into more detail on the show’s plot but I can’t and it is not sitting well. I’m the kind of guy that when asked what time it is will tell you how to build a clock! Try the series for yourself. Judge for yourself. If I didn’t think it was worth your time, I wouldn’t have brought it up to begin with.