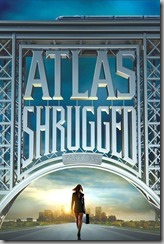 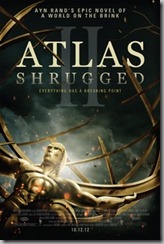 NO, this is not a bash session. This is not an exercise in trolling. This is not a vent, rant, or a demand for the professional banning of all actors and producers involved in the making of these silver screen gems. And yet. The Atlas Shrugged movies are (so far) less than great. Okay, less than good. These are not good movies.

Full disclosure. I actually own these films. I own Atlas Shrugged in both paper and audio formats. I own other Ayn Rand works. Heck, I even bought a hat. 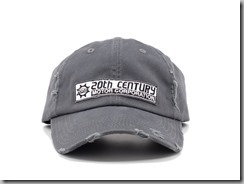 And I still think the movies are pretty bad, just for not the reasons most critics have savaged them. Atlas Shrugged is an immense work. It is a manifesto. It is the pouring out of Ayn Rand’s Objectivist philosophy into a fictional world much like our own. It is many things, but what it is not is a novel. And therein lies the inherent downfall with adapting it into a movie. Atlas Shrugged is a novelized philosophy text. I warn friends and acquaintances to whom I recommend Atlas Shrugged that if they walk into the book with a Harry Potter, Twilight, or Hunger Games mindset they are better off not even looking at the cover.

Atlas is not for escapism, it is for educating. Ayn Rand, through Atlas and her other works, wanted to change how people thought by introducing them to her moral code: Objectivism. A moral code, briefly, is a blueprint for living. Change a person’s moral code and you change how they think and live. Millions of words have been spilled debating, arguing, dissecting, and plain eviscerating Objectivism. My point here is not a dissertation on what it is or is not (I’m not thrilled by the movies is my point lest you forget), but I do think a summary for those unfamiliar with it is in order. A word of warning, however. Atlas is over one thousand pages long. I’m going to encapsulate some aspects that speak to me in five sentences or less. This is in NO WAY a CliffsNotes version of the book or Objectivism. Here goes: (1) As your life is yours, no group, society, or belief system may lay claim to you in any way without your permission. (2) Humans, having no instinctive method of survival, must use reason (the Mind) to survive. (3) Therefore, no one has the right to claim the products of your Mind without permission just as you have no claim to the products of others without theirs. (4) Capitalism, when operated correctly, creates an environment of voluntary trading between individuals where value (your best efforts)is traded for value (the best efforts of others). (5) Money, as a symbol of fair value for value trading, is a moral creation based on honesty and hard work that allows a person to achieve levels of security and freedom never before seen in human history. Okay. Not too bad. Over-simplifications with volumes of ideas left out, yes, but given I tried to squeeze a lake into an eyedropper I’m alright with these five.

The book has moments of excellent drama, comedy, wit, and some sex scenes Fifty Shades of Grey would be proud of, but they are ALL to illustrate a philosophical point, including (dare I say especially) the sex. It’s not impossible to do that in a movie, but it is very very hard and usually a horrible way to build a film. Every scene, every line, every set, every piece of wardrobe, etc. must be coordinated to almost subliminal levels to send messages to the audience. And that’s exactly what the producers of the film would have had to do for starters just to attempt an adaptation of a book that hammers readers with enough dialogue to make Tuesdays With Morrie seem like an Action-Adventure film. I’m not pessimistic enough to say the producers were doomed to failure from the start, but on bad days I’m very close to it.

Still, I applaud the attempt. Truly. I know I couldn’t make a film to do it justice. The material is so thick it’s intertwined. I will probably buy the third installment to show my support. I just won’t expect to feel the same gut reaction I do from reading a text populated by personifications of a moral code compared to watching actors reciting memorized lines. But in a way. I’m okay with that.
Posted by Sam Girdich at Tuesday, April 23, 2013 No comments: