It was announced on July 6th that comic book legend Steve Ditko died on June 29th. Steve’s career in comics as an artist, illustrator, and innovator cannot be understated. He co-created Spider-Man. He invented or contributed to a slew of characters for Marvel, DC, Charlton and others that ran the gambit from Squirrel Girl to the Objectionist inspired The Question. That is impressive in a way I don’t yet have words for. Like others, it was Spider-Man who pulled me into comics at an early age. Many fine creators have lent their talents over the years, of course, but to Steve I give special thanks. He also had a philosophical side which others have gone into great depths and debate about. I’m not diving into that well in this post. Let’s say this: Steve I hope you have your answers.

Seeing the announcement of his death online, I went surfing to see what was being said. That’s when things got worse.

On June 27th writer Harlan Ellison died. WHAT THE HELL?! How did I not hear of this? Harlan was a brilliant pain in the ass. He’s called a science fiction writer but he hated the title. If I can say anything about him that he might approve of it would be: he didn’t take shit from anyone. His fury at the changes to his work on Star Trek TOS (“The City on the Edge of Forever.”) is a good example. He also wrote A LOT. Over 100 books and around 1700 short stories to his credit from most of the reference sites I found. That blows me away. One of my favorites is “Repent Harlequin!” said the Ticktockman. Kafkaesque in theme, it is a wonderfully odd read. If you're searching for real a tale on those days when you're feeling just a bit too good about life then snuggle up to I Have No Mouth, And I must Scream. It will solve that problem real fast. I will miss his spirit and talent. 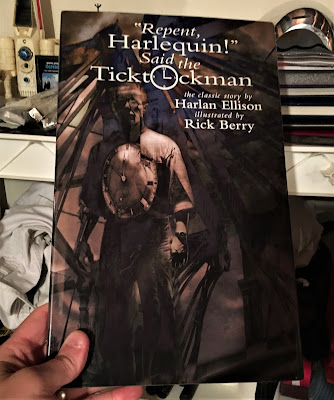 Seeing the announcement of his death online, I went surfing to see what was being said. That’s when again things got worse.

I learned Goth designer Cinamon Hadley, the woman who inspired the look and appearance of writer Neil Gaiman's Death character died on January 6th  of this year. Gaiman’s Sandman comic was part of an intellectual turning point in my life in college. I found his work shortly after discovering such influencers as the philosopher Robert Anton Wilson, comic writer/artist Matt Wagner, comic writer Alan Moore, and rock group Marillion (with Fish) amongst many, many others. I mourn her death. Her esthetique, as depicted by artist Mike Dringenberg, was new to my younger self. She walked herself and many others (friends of mine included) into new ways of thinking about beauty and image that we would be remiss to not give her a moment of silence and/or loud shouting.

Every day is the first and final day for many a someone, gentle reader. We don't know where all the ripples we cast in life end up. Be mindful of yours.

Enjoy and run with it!


To the lovers of the fringe, the odd, the independent, and the unique film experience. Thank you for helping support so much of what I love.