Sand Jerks. Or How I Learned to Stop Worrying and Hate Tusken Raiders

I know I’m wading into some murky Geek waters but I’ve got to get this off my chest: Sand People are douche bags. There. I said it. No regrets. Whether by design or laziness, Lucas created an alien race whose main characteristic is being a big fat jerk. Let’s look at them solely from Anakin Skywalkers’ perspective. They shot at him when he’s a kid in the Pod Race. They kidnap and torture his mother to the point of death, thus damn near kicking him into the Dark Side of the Force. Years later they beat up the son he never knew he had. A few more years pass to find the Sand Jerks kidnapping and torturing (again with the torture!) his childhood best friend Kitster who escaped only with the help of Han and Leia. At least most of the other bad guys had reasons. Storm troopers were born from unquestioning clones hardwired to turn on the Jedi. Battle Droids were programmed (poorly) to kill whatever they were pointed at. Darth Sidious plotted and schemed and twisted back-buried daggers in the cold of night to further his quest for power. But not my darling little Raiders! Just douche bags all the way down. 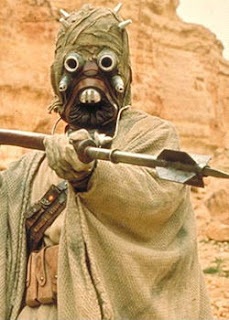 I’m not going anywhere with this in case you are wondering. Like I said, I simply had to get this off my chest. Sand People are doucherific. That’s all.