As some of you may have heard, DC Comics kicked a hornet’s nest by hiring award winning science fiction writer, and Mormon, Orson Scott Card to pen a Superman tale in their upcoming Adventures of Superman digit-first series. The April debut of this non-continuity, on-line only series is getting lots and lots of press, but not the kind I’m sure DC was hoping for. Card is an outspoken supporter of a male-female only definition of marriage, and therefore has made comments over the years many in the homosexual community find very offensive. Card wrote an op-ed piece in the May 3rd, 2012 Rhino Times lifted heavily from on a few sites I read. It’s not an outrageously long piece so I’m going to link here and let YOU read the whole piece (and not choice selections) to decide for yourself about the content. The bottom line of the on-line petitions is to fire him. The general logic is his anti-homosexual beliefs rule him out from being even remotely connected to the iconic Man of Steel. A character I feel compelled to point out is an alien and 101% heterosexual.

What none of the several articles I read mentioned was Card’s time at Marvel penning Ultimate Iron Man. I searched for a boycott of Marvel from Card’s time there, but didn’t find any. Full disclosure, I read through five pages of Google Search results, found nothing beyond the One Million Mom’s boycott attempt at Marvel (because some characters are gay), got bored, and stopped. Why wasn’t Marvel hit with this? Let’s expand this further. Card’s best-selling series Ender’s Game is slated for movie release this November from Summit Entertainment (a subsidiary of Lions Gate). Harrison Ford is in it. Again, I found no mention of backlash. Maybe I missed it. But again I ask why DC? Is it because it’s Superman, one of the most recognizable figures to young and old alike in the world? I don’t have the answer on this one. I merely thought it was interesting. Maybe you can figure it out.

Anyway, I mention this story in order to pose a few questions whose cores apply well beyond this matter. Let’s begin. If Card’s employment at DC is terminated, will it encourage him to re-think his position? Is threatening to remove one’s ability to support his or her family a proper means of education or is it a form of bullying? Would firing him open DC to a lawsuit for religious discrimination? Devoted members of several religions might become, or at least feel, unwelcome at DC. If NOT supporting a particular political or societal idea is grounds for termination, or not getting a job in the first place, what has happened to Freedom of Speech? And has employment now become a matter of passing a litmus test? Is lying then OK if it keeps you in good standing with special interest groups on either side of an issue? How is this different from when entertainers and artists were blacklisted for their beliefs in the 1950’s? Can one be pro-gay marriage and still write a good Superman story that doesn’t require Jimmy Olsen to marry his doorman to save the earth? (No, Grant Morrison, you cannot use that idea.) And finally, isn’t the whole idea to hire quality creators who produce high quality work the fans like? I mean, comic book fans are genetically predisposed to complain, criticize, rip to shreds, over-think, argue, and just plain bitch. If they aren’t buying, it doesn’t matter what the creator supports because the creation will go away real fast. You can be pro-everything and still have a real short career if you suck at your job, especially in comics.

Look, if you and thousands of your friends want to complain loudly with well thought out points about Card or anything else THEN DO IT. That’s Freedom of Speech. Just don’t forget that Freedom of Speech also applies to unpopular ideas. It’s supposed to protect you and me. It’s supposed to keep people from being punished merely for holding an opinion unpopular to the rest of society. Card has a right to work and support his family, just as supporters of gay-marriage do. Let’s talk. Let’s debate. Let’s politely raise our voices in heated discussions, but let’s not make threats. Boycotts, like any tool designed to generate then exploit fear, end discussion. They are a way to twist arms. They make people afraid to speak and be themselves. They make organizations and individuals walk a very bland, paranoid, neutral path. They silence us all for fear of being the next target. And don’t we have enough of that already? I think we do and I hope you do as well. Or I’ll boycott you.

Posted by Sam Girdich at Wednesday, February 13, 2013 No comments:

Thoughts of a Visitor

My father hated winter. The first falling of white would send him into a bee’s dance of endless puttering, planning, and just plain annoyance. Happiness to him was looking over long rows of living green coaxed skyward by the steady push-pull beat of John Deere pistons. Ma once told me if I ever wanted to know what a painter without paint looked like I need only watch Pa when snow covered the ground. Some good did come from those mid-western winters, though. During one long stretch of dull, overcast days Pa gave me his dog-eared copy of The Old Man and the Sea. He read and reread that book for as long as I could remember, but it wasn’t until I read it and felt Hemingway’s sun on my skin that I understood why it called to him. I latched onto Hemingway instantly and he deserves much of the credit for my career in journalism. I sometimes wonder what my biological parents would have thought of seasons. Krypton had none. There is so much about them I’ll never know, but I like to think they would have liked spring. It’s nice to imagine them sharing something in common with Pa. Me? I’m my father’s son. Spring is the best time of year. Especially for flying. 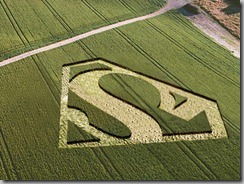 Posted by Sam Girdich at Saturday, February 09, 2013 No comments: