How Fast The Great Pyramid (updated 2020)

2020 Update. The construction time frame still orbits twenty-years in academic circles. Just letting you know as this post is almost as old as the pyramids. Carry on.

According to mainstream Egyptologists, the Great Pyramid of Giza was constructed roughly over a 20-year period starting in 2580 BCE. Probably on a Monday. It is comprised of approximately 2.3 million stone blocks with an average weight of 2.5 tons or 5000lbs.

Let’s do the math:

Really ponder that. For the Great Pyramid to have been built in twenty years laborers situated a 5000-pound stone every 4.6 minutes 24 hours a day for 7300 days straight despite errors, mishaps, or elevation. Don’t forget it hides shafts and elaborate interior chambers of amazing presicion. The 4.6-minute speed does NOT include these design features because no one knows how they were built into the midst of everything else. Plus, this does NOT include the time to cut and move the millions stone! Nor does it include the outer polished limestone layer that was pilfered over the centuries. 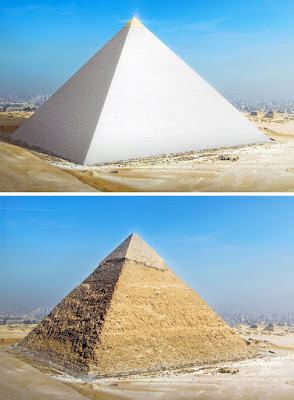 (Found this rendition on a number of sites in different formats, but never with a source for credit. Well done, mystery person.)

Then we have the logistics of producing/distributing food, water, beer, milk, and housing while disposing of...ahem...solid waste. My exhaustive online research found an average human spawns 3-8 oz of stercore, as they say in Latin, per day. Let’s call it 5.5 oz to keep it simple. While the true size of the onsite workforce is unknown, estimates place it in the many thousands depending on the time of year. 2500 humans in a single day, for example, could grace Giza with 859.37 pounds of germ loving detritus requiring constant attention so sickness didn't sweep away the labors. Or at best, get in the way.

Then we have the sourcing/crafting/replacing of thousands upon thousands of tools. Hammers. Chisels. Ropes. Ramps. Stone saws. Coffee makers. An entire industry all on its own. And what about replacing injured, old, or killed workers? Oh wait. I just remembered how to make more humans. Never mind. Let your mind wander around a bit on this: the support systems needed to build the pyramids might surpass, in some ways, the constructs themselves. And scholars wonder why us foolish, ignorant lay persons fancy outlandish theories about the lost and distant past on odd days. I’m not talking about supernatural or non-human forces here. I’m talking about the amazing weirdos we call humans. It gets a mind to wondering. Unless, of course, the ancients did have anti-gravity devices. The rotten slackers. Be well, gentle reader.
Posted by Sam Girdich at Sunday, August 30, 2009