Do real pictures always tell a real story? Do we want them to?

Saratoga is not known for the unknown.

Saratoga built itself on being known by the known for very known reasons, if you know what I mean. It is a tourist destination and always has been. From the Native American's who sought out its mineral springs to wealthy New York socialites who also sought out the mineral springs when they weren't busy gambling or ambulating in the park for a late afternoon constitutional. Then came the late summer of 1863 when a local casino owner/former boxer decided in the midst of the ongoing emotional and physical horrors of the Civil War to open a horse racing track. Saratoga (perhaps like your community?) likes normal. It breeds it like the thoroughbreds who draw thousands of tourists every year. Even the local catalog of hauntings and unexplained phenomena seem to follow a strict code of formality. Ghost Hunters filmed an episode here in -wait for it- a popular tourist spot and former casino. That's not a criticism of the show. I get how picking popular spots benefits them and the nature of these locations often make filming easier. I get it. The point is that in Saratoga even the paranormal fits into preset parameters.

Or does it? Here's my point and the purpose of this post.

I need help. I need to know what I am looking at. I need to know my mind is not playing games with me. Damn it. I hate that phrase. A game is something you win or lose. A good game teaches something in the process. So if my mind is playing a game then is there something to win? To lose? Who decides which is which? Is part of my mind trying to teach me, the core me, something? But if it is making a decision to play or teach or both does that mean IT is the core? We're all made of parts. You can watch yourself think. You can watch the part watching the thinking happen in real time. Crap. I'm doing it now.

I've digested a lot of movies, books, graphic novels, poems, videos, games, and other stuff. Lots. There's stored and cross-connected information in my mind I don't remember putting in me. So I read into things. I make leaps. I solve puzzles before all the pieces are on the table. I pull answers out of my ass that smell like dew slick lilacs. I hope that resonates with you. I really, really hope you can relate to that because I need your help.

What am I seeing in these pictures? My mind, some part of my mind, keeps connecting them to form a narrative and I can't stop it. What kind of cruel game is that! Here's an example of what I mean... 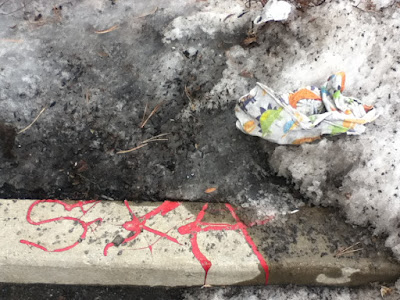 Found this in a parking lot this Spring. That's a pair of torn baby pajamas next to...what?...the graffiti of a ska music fan? A fan who carries a container of paint to pour and not a rattle can with which to spray? What if that is an acronym? Or worse, a signature right next to torn baby's clothing. Proves nothing, I know. Humans litter and vandalize every day. Plus, the proximity of two objects does not equal a common source. I get that. But can I sweep the image aside and stop myself from thinking about it? No. Why? Because a couple days later I found these. 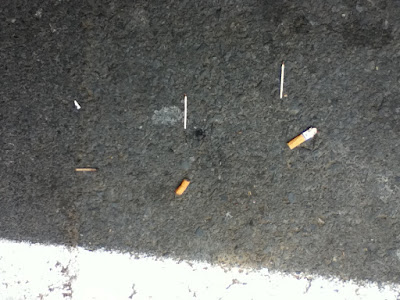 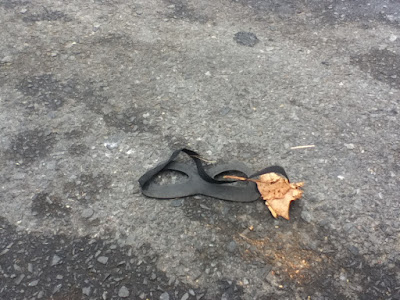 The wooden matchsticks caught my eye. Don't see those too often, do you? Then I saw the mask. It looked like someone was waiting, doesn't it? Light a match. Smoke a cigarette. Light another match. Smoke another cigarette. Waiting for what? The person in the mask? There's the mask. Where's the person? It's a cheap mask you can buy anywhere at Halloween for like $2. Probably some kid dropped it. Again, proximity doesn't equal connection. So, what about this? 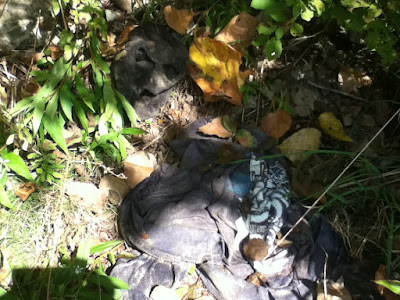 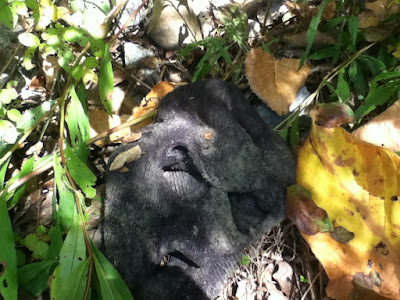 At least finding a ski mask(?) makes some sense given the asshole long winter we just had. But what about the clothes? Why are they there? More littering? But TWO masks! When was the last time you found two masks within a couple of miles of each other? Weird coincidence, right? But is that the answer for everything? Find an 'out of place object' and simply write it off as littering or coincidence. Here's a question: how many times does coincidence have to happen before it stops being coincidence? Deadpool called convenient circumstance "lazy writing". Step out of a movie theater and I call it lazy thinking. Sorry. That was not fair. You don't have all the pictures, do you?

Mystery masks. Out of place objects. An empty encampment. You see it, right? I can't be the only one pulling these pieces together. Has the gestalt of the normal affixed blinders to most of those around me? Do you believe me when I say I never went looking for the unusual? I mean, I do try to pay attention to detail when I am out in the world. Huxley had a point when he observed our minds are tools of reduction. Our normal state is one where the multitude of input we could perceive from all there is around us is nearly infinite. Therefore, it could overwhelm us. Case in point, when was the last time you smelled your own nose? Am I subconsciously fighting against this natural defense? God help me, I feel like the unreliable narrator of a Lovecraft tale. An unsettling quote comes to mind.

"The most merciful thing in the world, I think, is the inability of the human mind to correlate all its contents." - Lovecraft

Remember his story The Dunwich Horror? The great smashing of trees as Wilbur's brother fled the ancestral home? 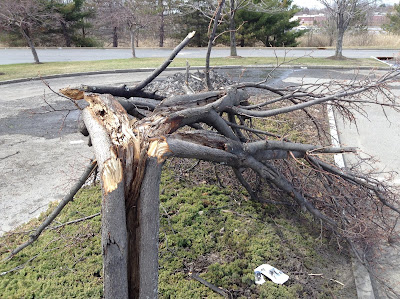 All the other trees were intact. What happened here? What split the tree? Do you see it?

See it? It is split in two directions. Two. What PUSHED this tree over? And why. What wears a mask and can push over a tree? NO. I can't go down that road. It's disastrous. Insane. See? That's why I need your help! I need answers. I need alternate explanations I need to know why this was next to the tree. 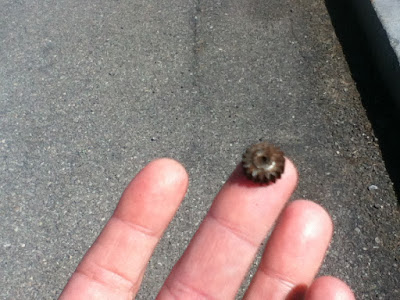 "Meaningless COINCIDENCE!" I can say it as well as you can. That doesn't make it true. A gear is but a means of transmitting power. Power to...I don't know...tear open the side of a tractor trailer. 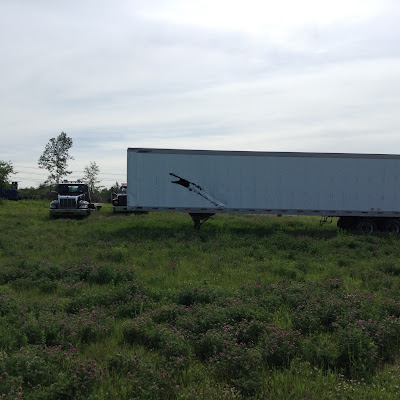 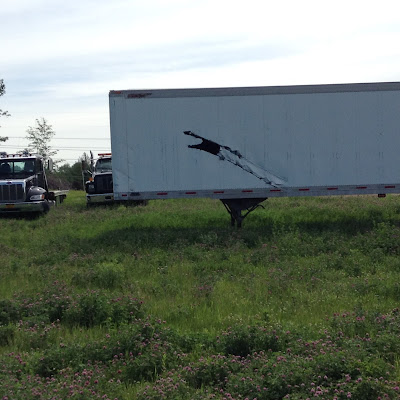 Should I keep telling myself, "That's an odd coincidence." or "That's interesting."? How many times must I say these words before I question if I'm using the correct words? Here's the kicker: these are only a few the "things" I took pictures of. I've seen more. I've probably seen more than I've realized. Or have I? I don't know. Have you seen things, reader? Did you ever see something that gave you pause to wonder how or why it was there? Or, did you brush it off? Did it make wonder if you or anyone really knows what happens when we're not paying attention? Did it make you wonder if there is a price to pay for paying attention? Ultimately it doesn't matter if you live in the communal 'everything is right as rain' narrative of Saratoga. What is important is whether you truly want to know what might be happening around you.  I'll post more pics as I come across them in the hopes of crafting a compass of value for this strange land unfolding around me.

To end the piece but not the mystery, let me ask you this: do you ever ask yourself what in the world you might not be seeing?