“But had the walls eyes to pluck out….” 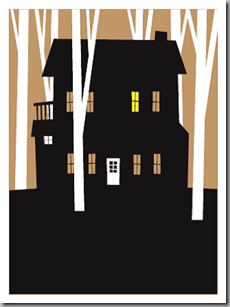 Some of you are familiar with our story The Haunting House. Put simply, two men enter a purported haunted house only find out the hard and final way the reports are correct. Thematically I wrote it to try to spur the reader into thinking what it means about the nature of the universe and reality if a haunted house can exist. (Frightening stuff if you carry the logic out fully, but I’ll elaborate more on that in a different post.)

What very few are aware of is that this tale is a small part of a much larger, more serious and scary story I am working into a novel.

Enjoy this tiny sneak peak into the troubled background of The House. They set the tone for the novel.

PIECES OF WHAT THE HOUSE HAS SEEN

Robert Brinkerhoff was a socially awkward, nervous young man who enjoyed the quiet and predictable life of a banker. Ruth was a vivacious flapper from a small Westchester County town drawn to New York City during the Roaring Twenties. The unlikely pair met at a Petting Party that the timid professional was tricked into attending by coworkers. Robert was too shy to talk to any of the women present, which was exactly what caught Ruth’s eye. She found his discomfort charming. She walked straight up to him, said Hello, and stole his heart. They quickly fell in storybook love and spent the next few years in Manhattan before moving Upstate to start a family. They thought it was a stroke of luck to find such a large home at such a low cost, even for Depression Era prices. The real estate broker never mentioned any of the local legends and mysteries surrounding the house. They planned and prepped to spend the rest of theirs days in each other’s arms.

Three weeks later they were both dead.

The Warrenders built the house in the mid 1850’s, but they weren’t the first to live on the land. The grounds had a long history, a fact Mrs. Warrender hated. Mr. Warrender in his typical patient manner explained the practicality of tearing down the large, pre-existing colonial and re-using it in the new construction. He also explained with much logic why the old barn should remain untouched. She listened but heard none of it. She clutched a life-long list of hatreds, miscarriages of justice, and perceived slights close to her heart like a rosary. She despised the older and unsophisticated Mr. Warrender. Much can be overlooked for security she told herself again and again during their lavish wedding ceremony some years earlier. She birthed three children who were all taught to call her mother when old enough to speak. The single light in her life was William Abbott, her husband’s handsome business partner. She loved him fiercely, though he never knew nor suspected. His Sundays visits, especially when Mrs. Abbott could not join them, made life tolerable. Then one day Mr. Warrender, Mr. Abbott, and group of local men went hunting for deer in the nearby woods. Mr. Abbott never returned. It was a terrible accident, all the men agreed. Mr. Abbott was careless and walked in front of Mr. Warrender’s rifle at the exact moment he fired. An accident? she thought late that night How? and more importantly Why him? She rolled the question over and over in her mind looking for an answer as her husband lay sobbing in his room next to her’s. A very small, very clever voice answered her. The next day she searched for a title in their library. She had argued against the books (Mr. Warrender insisted the children needed them) but the voice reminded her of a story that made her, silently and for the first time, thank her husband. The book was titled Hamlet. Mr. Warrender was found in the root cellar two months later. Mrs. Warrender dutifully wiped the tears from her children’s eyes at the funeral. The following years were the most peaceful of her life. Then one day the little voice came back. Go away she told it. I don’t need you anymore. It laughed in her ear. At night it crawled into bed with her and reminded her of the list. She ignored it and told herself it wasn’t real. And yet. Doors opened by themselves. Floors creaked. The servants whispered of a dark shape hiding in the library. The voice reminded her it of its good council. It then pointed out how much her two youngest, Charles and Edward, looked, acted, sounded, and even smelled like their father. Mrs. Warrender had to agree. Both were dead within six months. Only her eldest, George, whom she thought looked a bit like William, was left alive. She would make sure nothing happened to him. The year was 1860. 1861 came and her eldest died with the eldest and youngest of a nation torn apart. One day the servants woke to find the front door open and Mrs. Warrender gone. Her body was never found. In time the town folk came to agree poor Mrs. Warrender had succumbed to despair and a broken spirit.

In a way, they were right.