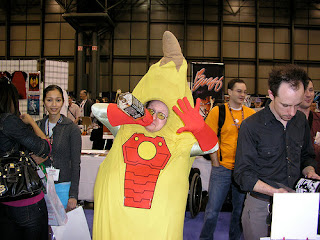 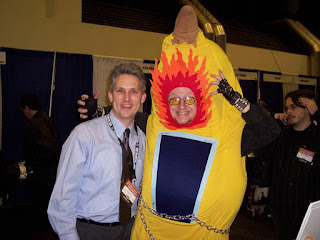 An old friend recently posted a photo on FB that lead to a sad discovery. Meet AJ Confessore, aka C.C. Banana. I met AJ a number of years back when Mark and I first attended the NY Comic Con. Here was this friendly, odd fellow who used humor and an ever changing banana costume to score interviews with well-known artists, writers, actors, and musicians. We became Con acquaintances. We’d exchange emails, see what shows we’d both be at, and make sure to take a minutes to say hi and catch up. Over the years as I was able to attend fewer and fewer Cons we fell out of touch. I hadn’t thought about AJ for some time until I saw the photo. It was from a 2011 interview series he did for Midtown Comic at the NY Comic Con.

Cool, I thought. Let me look AJ up and see what he’s been up to and drop him a line.

It seems there was a series of events in his life that he felt he could not overcome. The monstrosity of life, as he saw it, was too much. I’m not going into the details. I read people tried to help him, and for that I am grateful. I know stuff happens in life. I know not every story has a happy ending, but I did not expect this. Who does, right?

In my mind there was this person walking around the earth (AJ aka C.C.) doing his own thing, only to learn that was completely wrong. Normally my mind would craft some lesson, some example of the value of keeping in contact, the importance of learning warning signs, or, I don’t know, SOMETHING. I got nothing. I’m just stunned. I don’t know what to do with this. I don’t even know if I am supposed to do something with this. I just don’t know. I keep wondering about all the other people whose path I’ve crossed, but that feels like living in the past. Maybe the lesson is that not everything has a lesson. People make choices. You. Me. All of us. Is that the lesson? Remembering we have choices? Hmm… I’ll ponder that.

Goodbye, AJ. I liked you. You always had a smile, a hardy handshake, and a quick quip at the ready. I will miss you.
Posted by Sam Girdich at Sunday, May 31, 2015