{UPDATE: Sad news, gentle readers. Naomi Parker Fraley, the real inspiration for Rosie the Riveter, passed away on January 20th at the age of 96. It was only very late in her life that she learned of her importance in American iconography, and the inspiration she brought to millions. On behalf of us all, Thank you Naomi.}

Apart from for the overly simplistic (yet factually accurate) summation of some serious next level shit happened, I think without diving into the muck and mire of recent events my above description works well. Self-congratulations aside, it was the Internet’s flood of reactions to the Women’s March of 2017 that sparked this blog. I saw the image many know as Rosie the Riveter remixed and repackaged as a show of support. All images in this sample copyright of their respective owners. 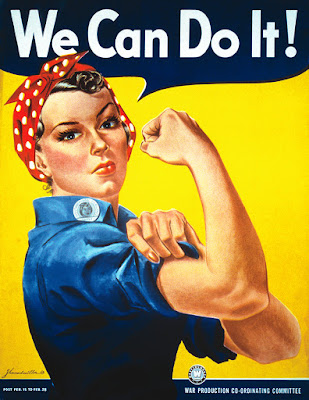 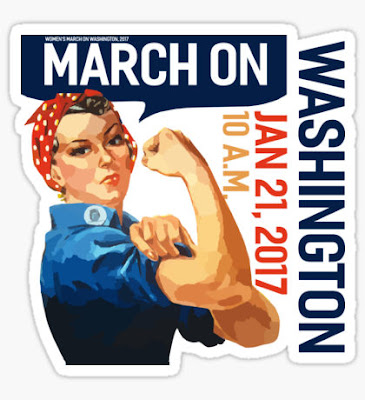 All fine and dandy, right? Yeah…not so much. Next is the image I’ve seen a bunch that ‘sets the record straight’ on history as a retort to the perceived political ‘narrative over substance’ nature of the March. 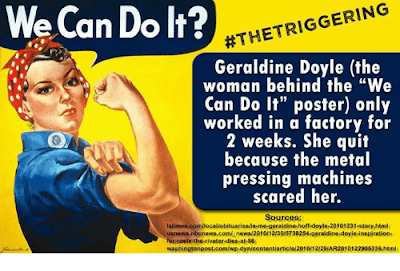 Ouch. And, as it turns out, this image is factually correct. The woman noted as the model of “can do-will do” feminine strength lasted only a couple of weeks on the job before quitting.

Unfortunately, there’s this little problem. BOTH USES OF THE IMAGE ARE WRONG!

Let’s set the record straight for the women involved. They deserve it. Step into my Wayback Machine, won’t you?

World War Two was what is termed a “total war”. In other words, the full resources of the countries involved were hurled at each other. As men were armed and mobilized to the far corners of the globe to fight and die, the women remaining on the home front adopted both industrial and military support/supply positions. Men fired bullets made by women, to oversimplify it. Most accounts estimate about 18-19 million US women joined the war effort. Both grassroots support and governmental propaganda flourished. In 1942 a song written by John Loeb and Redd Evans introduced the term “Rosie The Riveter” into the cultural vocabulary. It resonated well and quickly became the de facto designation for women committed to winning the war.

https://youtu.be/XJxe3vQRMuY   listen to this 1943 rendition by Allen Miller and his Orchestra.

Here is the definitive Rosie the Riveter image. 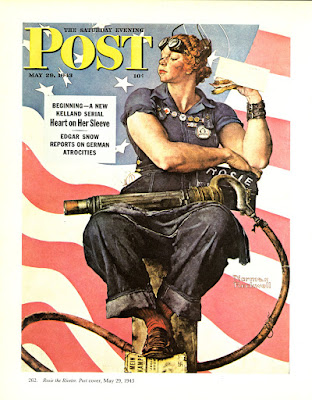 As originally crafted by the artist Rockwell in 1943.

Sporting a ROSIE lunchbox and a copy of Mein Kampf well placed under the heel of this symbol of America’s industrial war might, this is the Rosie image Americans rallied around. The woman who modeled for the painting was Mary Doyle Keefe, who passed away in 2015.

From accounts I’ve read, Mary was a bit taken aback by the finished product. You can tell that the image and model are not mirror images. Norman was to have told her that the inspirational image had to be larger than life. Mary never worked in a factory. She worked as a telephone operator in Vermont where the Rockwell’s lived. Norman’s wife used to pay their phone bill in-person to Mary and that’s how the two connected. So, when you think Rosie, think Mary.

Circling back to the start of this piece, we still have our original poster model to sort out. The “We Can do it” poster was actually made solely for the Westinghouse company based out of Pittsburgh, PA. The creation of J. Howard Miller, the 1943 poster was part of a series of work designed solely for Westinghouse plants focused on wartime production. The poster was not widely distributed, nor made for mass distribution.  In fact, though iconic as it is now, the poster largely disappeared for decades. It wasn’t until the 1980’s that it was re-discovered and drafted into the realm of women’s rights. Here is when Geraldine Doyle shortly entered the story.  Accounts vary slightly in the articles I found, but basically it happened thusly. Geraldine saw an article about the poster in a Smithsonian Magazine piece in the mid 1990’s. She couldn’t help but think the then unidentified subject of the poster looked a lot like her seventeen-year-old self from 1943.

She contacted author and researcher Penny Coleman about the poster and other photographs associated with it. She worked for a short time as a metal presser at a plant outside of Detroit, and she remembered United Press photographers taking pictures of workers, including her, in the plant.  Geraldine therefore concluded the image was based on her. And people ran with it for the rest of her life. When she passed away in 2010 media outlets around the country ran stories about her connection to the iconic poster. It was this attention which eventually led to the discovery that she only worked at the plant was a short time. Geraldine wanted to be a cellist, and as the person she replaced at the plant had suffered a severe hand injury, she opted on other work rather than risk her hands. Thus, the aforementioned “retort” image.

But remember, Geraldine only thought she was the model. No proof existed. Let me repeat that. No proof existed. Enter a bit more historical research in recent years and we meet an equally young worker at the Alameda Naval Air Station installation on San Francisco bay by the name of Naomi Parker. 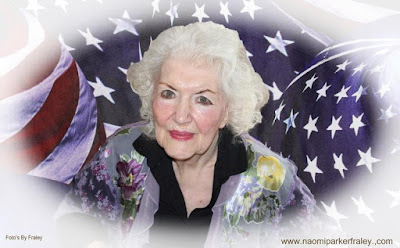 Naomi was working at the installation in 1942 when a photographer on assignment came to the site. The resulting article was published in local newspapers and beyond. She clipped the article, as any of us would do, and stashed them away with little more thought. As her family’s website states: “Naomi never thought too much about the picture until 2009 when she and her sister Ada Wyn visited the Rosie the Riveter National Park in Richmond for a gathering of the Rosies. While attending the event, they stepped inside the Park Museum, (SS Red Oak Victory Ship), where they saw a "Big ol' Picture" of Naomi working at her lathe at Alemeda… but it had a different name below it! It was the same picture of herself that Naomi had clipped out of the newspaper so many years ago.”

Check out the site here:  www.naomiparkerfraley.com.

In it you will find substantial, primary evidence that Naomi is indeed the woman in the red bandana that a Westinghouse contracted artist turned into a timeless icon!

As usual, I took a lot of info and whittled it down to tell a story I hope will inspire you, gentle reader, to learn more on your own. Let’s draw the tale together in the meantime. The “We Can Do it” poster was NOT a representation of Rosie the Riveter, nor was ever meant to be. It was an internal corporate campaign to boast morale and production. Normal Rockwell’s painting of Rosie was the standard of its time. “We Can Do it” was largely forgotten for decades, and upon re-discovery a woman who honestly thought the image was of her came forward to take credit. This lead to both recognition and questionable posthumous notoriety because of her rapid, but understandable, exit from the industrial setting from the fear of losing her musical aspirations. Meanwhile, the woman who appears to have been tough and tumble concrete muse quietly lived out her life.

Now we know the actual players, but what of the outcome? Does any of this change the symbolism? Yes and No. The memes attacking the poster are total crap, and I hope against hope for their extinction now that actual person behind it is finally coming to light. Knowing the internet and having a feel for the sheer weight of the articles floating about with wrong information, I am not holding my breath. That said, I hope you noticed a small, quiet member of the tale who makes all the difference. Geraldine filled an open position in the plant because of a severe injury to an existing worker. Somewhere out there in the USA is the family of a woman who lost some or all of the use of a hand because of her commit to the war effort. It doesn’t matter what Geraldine did, artist model or not, because a group effort by MILLIONS AND MILLIONS OF INDIVIDUAL AMERICANS beat an enemy so evil that to this day we struggle to comprehend their actions. So much so, in fact, that we have turned them into clichés and casually thrown political labels. Women, with honor and pride, took to the workforce in ways rarely before seen in our country’s history. Respect and honor their actions. Children too young to work or legally enlist (many broke that law including members of my family) collected scrap materials and helped plant Victory Gardens. Respect and honor their actions. The elderly and those labeled “infirmed” bucked convention and became plane spotters and member of the Civil Air Patrol. Respect and honor their actions.

Let’s not pluck men and women from the pages of history and twist them into tools for own wants and end. It diminishes both us and them. And that just plain sucks.