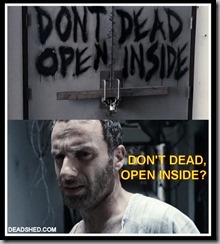 Zombies have been crazy popular for a while now. If you’re reading this then there’s a very good chance you fall somewhere in the fandom horde. You’re kind of my proof of the first statement. (Thanks for the assist, by the way.) So have you asked yourself why are zombies, the living dead, walkers, shamblers, zed heads, crawlers, G’s, biters, etc. enjoy such popularity?

They aren’t sexy. Outside of fan fiction I don’t want to touch with a rotting ten-foot pole, of course. This is the internet age, after all. Sure, there are a few examples of romantic sexy-time in the genre. Warm Bodies was a notable example. Most of the other zombie films infused with a love-story involved ‘love doomed to fail’ like in Rec 3 or the very enjoyable German film Rammbock: Berlin Undead. Good stuff, yet not exactly the hormone infused material to fuel the hearts of teenaged girls and middle-aged women into parting with their money and panties. Sparkling vampires, anyone?

What about violence? Violence is popular. Word on the street is humans have been practicing it for a long time. There’s something to that idea we’ll swing back around to shortly, but no, it is not the deciding factor to explain the popularity of zombies. If gore alone was the magical ingredient then Hostel or Dead Again would have their own television series and children’s books. Gore is too easy.

Characters then? Strong, smart, likable characters must be a constant in the genre like the Northstar in the Heavens. No. No. And no. Most stories are filled with some or all of the usual suspects: the cop/ military/survivalist type, the thinker/scientist, the teenage lovebirds, the expendable Average Joe or Jane, the person with the “dark secret”, and the main characters that almost never die, or the sexy chick. The later comes packaged for whatever the popular look of the day is. Think of Linnea Quigley as Trash in Return of The Living Dead. She was wearing leg warmers. Still very popular today, said no one ever. Notable exceptions do exist, of course, such as in the writings of Max Brooks. World War Z and Recorded Outbreaks have smart and resourceful characters. I highly recommend the audio book for the all the well-known actors whose talents brought the undead book to life such as: Henry Rollins, Mark Hamill, and Alan Alda. The movie and book have little in common. So disappointing…

So, mulling over the list of attributes of sex, romance, violence, and strong characters that normally translate into popularity we find rare, isolated examples of each but nothing to really nail down why so many people spend so much time watching or playing fictional people fighting to stay un-eaten, un-consumed, and un-overrun by a tireless, mindless, adversary that cannot be reasoned with.

Zombies eat the living. Obvious, I know, but think about it. What if what makes zombies popular is what they do. They eat you alive. I once manage a large, well-stocked, and awesome video store. If you failed to buy a calendar, had no windows, and never left your basement you could tell the changing of the seasons by simply calling us and asking what movies were popular. Anyone who has ever worked in a video store will attest to how the season and holiday equaled the empty spaces on the shelves. Valentine’s Day moved all the Rom Coms. Halloween cleared out Horror. And so forth. But there are two other seasons: school finals and tax season. Months apart on the calendar and often decades distant measured by the age of the participants, both times of the year showed the same spike in rental activity. The college kids rented more Horror with a lean toward zombies just as the 9-5 working adults. This never changed in the seven years I managed at the store. Chatting with both old and young yielded the same feedback. They both felt overwhelming pressure. Forces were bearing down upon them that could not be reasoned with, that were seemingly everywhere, and that little by little consumed their lives, time, and energy. Sound familiar? Zombies are popular because they personify stress. Zombies are mindless, uncaring, unthinking dangers that eat you alive. Alone they can usually be handled with a high degree of success, but they are never truly alone. Think of all the things in your life, big and small, that drain you. Think about the stresses that pull you and take your time and attention, and therefore overwhelm you. Zombies do to the physical form what day to day life can do to us spiritually, emotionally, and financially. Our culture, whether it realizes it or not, is crying out for help because it feels like it is being eaten alive.