I happened into a place. It had comics. Lots and lots of 80's and 90's comics with lots and lots of 80's and 90's independent comics. Not even a comic shop, just a store that sells used books and movies. For whatever reason, it also had long boxes teeming with comics. Holy crap that's f'ing cool, am I right? What a find. The money and joy flowed like the swollen rivers of Spring.
One title had an introduction by cover artist Matt Wagner. Yes, that Matt Wagner. Fantastic. He described Bill Widener’s Go-Man as:”...if Jack Kirby’s meth-headed grandson read a whole lot of Marshall McLuhan while an episode of Miami Vice blared away at him from a thirty foot screen.” 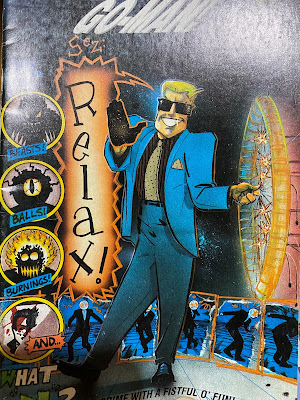 Marshall McLuhan evoked in a comic book introduction? What? How is this possible?!
Oh yeah, it was 1989.
Comics were a beast of a different fur back then. The Big Two fought over talent and market share, while the independent ecosystem flourished. No, most independent titles didn’t stay afloat long, but the whirling melange of new titles flashing into existence to fill the voids struggled well to the betterment of the medium. Tim Burton, Mr. Mom, and Wilbur Force assembled to make a little fan flick called "Batman". Verily, foundations were being well set into the Earth. We were two short years from 1991's "X-Men" #1 selling eight million copies. Four years from Vertigo birthing itself in a gas station bathroom stall to the piped music of Tom Waits. And social messages? To think of today’s market as the watermark for diversity is to ignore the life and times of Karen Berger. Ann Nocenti’s "Daredevil" run alone was a college course in cultural affairs. The market was teeming with the rehashed and the startling new. And today? Well, I don’t see it that way. Maybe I am wrong. Am I?
I desperately hope I am.
Are YOU learning anything new from comics? Name more than two comics today that do, or could, invoke McLuhan. Where’s Yukio Mishima? Where’s Robert Anton Wilson? Where's Ayn Rand? Where's Anansi? Where’s Joseph Campbell? Where's Charlotte Perkins Gilman? Where's Robert Bly? Where’s Heraclitus? Where are the Grimm Brothers? Where’s Hypatia? Where's Thomas Aquinas? Where's Burroughs? Where's Plath? Where's Ellison? Where’s the Golden Ratio? Where’s Vonnegut? Where’s Waldo? I want the sequential art medium to feed me, challenge me, anger me, and confound me as vibrantly now as it did 30 years ago. Yeah, I am older and far more experienced. I wear the medals of Pain and Miles. I carry the wisdom of scars. Are those any reasons to assume comics can’t be a balm? That the pages of fantasy and the fantastic must fall silent before the slogging parade of years? Hell no!
At least I hope not.
No. Strike that. Reverse it. I want, not hope, the New Release shelves to shine like a baby star. I want the glistening, bristling creativity of the unexpected. Too much to ask? Okay. Fine. We'll compromise. How about we settle on entertaining. Is that too much to ask of a publishing industry seeking our money and praise and money? To pull us, albeit briefly, away from the pallid gaze of the morning alarm, the monthly bill stack, and the daily rut vampire?
Well, gentle reader, I fear it might be.
Stan Lee exclaimed, "Excelsior!" from any rooftop, bus station, or international media outlet he could climb on before getting caught. I keep my ear to the ground today. The peaks and valleys carry jumbled static. There is no voice rising above the din crying, "Great stories come first!" or "Our goal is to be the best!" In the Maker's name, please correct me if I am wrong. I know examples of quality storytelling exist because when found I throw my time and money at them with thirsty gusto. Unfortunately, they are far and few. I will say none thus far carry the mantle "reboot", "relaunch", "re-imagining", or "revamp". It's been my experience that those words mean 'creativity by committee', which is no creativity at all.
(Side note: I would give real money to see a Raymond Chandler, crime noir-esque Batman movie. Hello? Hollywood? World's Greatest Detective? Hello?)
Heraclitus observed, "No man ever steps in the same river twice, for it is not the same river and he is not the same man."
McLuhan observed, "Every society honors its live conformists and its dead troublemakers."
Shannon Entropy, as part of Information Theory, observed: The amount of information in a message is the amount of surprise. In other words, if you know what someone is going to say before they say it, then their message contains no information. Consider what this means in our social media age, and how it impacts comics. Oh? You see how that includes many other things? Well, I leave that for YOU to ponder...
Bill Bryson observed, "My first rule of consumerism is never to buy anything you can't make your children carry." Children can carry LOTS of comics. Just saying.
I want to spend lots of money on comics. I want the comic industry to want to earn my money. It has generations of readers eager to shove greenbacks down their corporate G-strings if they'd give us reason to. We nerds like to spend money!
Be as topical as you want, but do it with an ear to quality. Try new things while respecting the good that came before. Encourage and foster new talent while giving credit to the talent and concepts that carried you this far. Give us tales to pass down to our children. Hero's Journey? Anyone? That one seems to do well over the, oh, centuries.
I want new and amazing. I want familiar and true. I want to spend lots of money.
Well, comics industry? Here's the dangling carrot.
What say you!
Posted by Sam Girdich at Monday, July 05, 2021