A month back I mentioned I am trying to secure new interviews for the blog. Well, it appears I might have struck out in my attempt to interview Giorgio Tsoukalos of Ancient Aliens fame, though I hope I am wrong. I haven’t heard back from him yet. I am not giving up hope! He’s a busy guy and he must get lots and lots of emails.

I enjoyed penning the query email and the interview questions so I thought maybe you’d enjoy reading what I sent him. Raise a glass, gentle reader, to the once and future interview!

Thank you in advance for taking the time to read my email.

My name is Sam Girdich. I am a writer, history & science buff, and co-founder of the sequential art/graphic novel project Strongarm Labs.

I understand time your time is valuable so my interview format is designed to be quick and easy. I pose three main questions with one follow-up question each if clarification is warranted. And that’s it! I do not edit your replies in any way. Not a word is touched. I will send you a full copy of the interview pre-posting so you see exactly what the readers will read and give you the final word to publish it or not. My goal simply is to have fun and provide an avenue for myself and others to learn something new.

Before you read your three questions below, I invite you to visit my blog Lab Work to sample my posts and other interviews, as well as the Strongarm Labs page. Heck, Google or Facebook me if you want. I want you to know who I am and how I think so you know you can be comfortable having your name on my site.

I’ll wait here while you go check me out.

Here is your intro, interview questions, and blog draft: 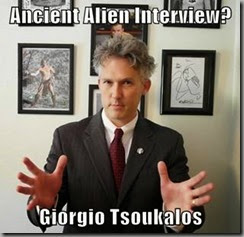 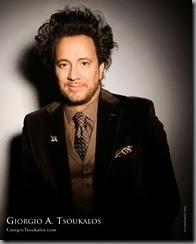 (Giorgio is a better dresser than I.)

International traveler, speaker, and researcher Giorgio Tsoukalos is best known as a contributor and consulting producer of H2’s Ancient Aliens series as well as starring in his new H2 series In Search of Aliens. He is a proponent of the Ancient Astronaut or Paleo-SETI theory of history. Put simply, the theory holds early human development shows signs of unexplained biological and/or intellectual leaps, improbable similarities between cultures separated by vast distances, and anomalous artifacts that could be explained by the intervention of non-terrestrial, non-human agencies misinterpreted as supernatural beings.  Torch bearer of internationally bestselling author/investigator Erik Von Daniken, Giorgio is the Director of von Daniken's Ancient Alien Society based in Switzerland. He owns and maintains www.legendarytimes.com. He currently resides in California, USA.  (In the final draft I will link to the aforementioned sites.)

Before we begin let me state upfront what I think of the general concept of the Ancient Astronaut theory: it is possible. Given our current estimate of 13.8 billion years for the age of the Universe – which actually is another way of saying the age of Time if you think about it – and the growing number of confirmed planets (1,815) our fledgling instruments have already detected it seems unlikely (though not impossible) we are the only life that is, was, or will be. Couple this with how Humans behave and you have a legitimate chance that a sufficiently advanced civilization -if its psychology is remotely similar to ours- would go door-to-door across the Cosmos poking under rocks and occasionally messing with the locals. Do you truly think Humans would do no less given the opportunity? We’re explorers! We’re curious! Put a big red button in front of us and no matter how many warning labels you slap on it, we are GOING TO PUSH IT. For good or bad we are our best proof of possibility.

Of course possible does not mean likely. The Paleo-SETI theory is a theory. But as such, it must be debated with an open mind with the known facts and a willingness to incorporate new facts and discard disproven ones. A healthy skepticism of the old and new is paramount in any field of study. History, my lifelong field of interest, is constantly being re-written! Never should the prior generation’s dogmas be accepted as the final word.

Question 1. The Ancient Astronaut theory is criticized by some purely on the principal it robs humanity of some of its creative spark; as if to say without some outside influence we as a species are incapable of intellectual leaps, or at least less capable of them then we like to think. What is your reply to this line of thought and where in your opinion would humanity be without the extraterrestrial influences you posit?

Question 2. Is there a peer review process in the Paleo-SETI field? Mainstream academia routinely uses peer-to-peer review of findings to sift out erroneous data, flawed theories, or weed out frauds –which happen in mainstream academic institutions like any other field despite the impression to the contrary. If not, why and how might the field be affected by such a practice?

Question 3.  If granted unlimited resources, into which one spot on Earth would you pour your time and energy investigating?  Why this spot? Whom would you bring with you, if anyone, and what would you do there?

I know you are busy, so I really appreciate your time. Please let me if we can work together! Having fully read works by von Daniken, Hancock, Vallee, Hoagland, Strieber, Fort and others I have lots of questions I would love to ask you in a future interview.