If I am elected your President


I have heard it said that the odds of becoming President is tantamount to selecting the winning number for several consecutive lotteries. This is a true statement if only for the reason that other lottery players are not, and cannot, actively trying to DESTROY you. But back to the lottery for a moment. Most of us have fantasized about winning the lottery and enjoying the freedom and security that financial resources provide. In that vein, let me fantasize about what my Administration might look like. This is an incomplete picture, of course, but perhaps you will like the outline you see. Perhaps you will help me fill it in? Honestly, the best measure of my thoughts and priorities come from reading the words found in the rest of my blog. Seriously. That’s not self-promotion but a factual statement. Nuff said.

1. A national campaign to start fostering the U.S. as the most fluent country in the world.
- I will work with the Congress and Educational experts to develop a monetary reward program for students, non-English speakers, or just the average You and Me citizen to become conversationally proficient in English and other languages. I imagine a future where the free flow of ideas is not halted by language barriers. We can’t have real communities or neighborhoods if we can’t speak to each other.

2. Mandatory Fact Checking in Politics
- Working with the FEC and Constitutional experts I will determine if it is possible to REQUIRE all those seeking political office to provide a list of sources for all political speeches, advertisements, campaign statements, and fund raising. We require elementary school students to list their sources when writing papers, so those seeking political power should at least be held to elementary school standards. I would go so far as to impose a fine on campaign speech that isn’t provably honest.

3. Re-Evaluating Our Foreign Aide Policy
- Your money, in the form of funds collected as taxes, is sent outside of the United States in the billions every year. Much of it does a lot of good for a lot of people, but not all of it. Therefore, I will re-evaluate where YOUR money goes and what YOUR money does. If YOUR money isn’t spent in a way that somehow benefits YOU, then I will stop it. If YOUR money isn’t making the world a little better, a little safer, or a little less chaotic for YOU and YOUR family, then I have a responsibility to see it goes someplace it will.

4. The Law
- My administration will follow the letter and intent of the Law and the limits set forth by the Constitution. Period.

5. NASA
- NASA’s role as been that of humanity’s unofficial agency of space exploration. I intend to make it official. When we begin to tap the unlimited resources of the Universe we will leave behind the resource wars that have plagued human history. The rest of the world is welcome to come with us on this journey. It is their choice. I have no desire to drag people into the future.

6. ISIS
- I will humbly ask retired Marine General James Mattis to come out of retirement. I will then give him all the resources he needs to wipe ISIS from the world. Done.

7. Perspective
- I will seek to make the poem Desiderata, popularized by Leonard Nimoy as ”Spock Thoughts” required reading in schools. If you’ve read it, or heard Leonard’s rendition, then you know why I picked it. If you haven’t and decide to check it out now, then I have already accomplished more than I could have hoped for. Thank you.

8. The Environment
- We need it. I will seek to protect it. I will consider hard scientific face and NOTHING else. Period. I will also advocate for the creation of an independent Unintended Consequences department. This department’s role will be to play Devil’s Advocate before any program (environmental or otherwise) begins. Any possible negative impacts of a new program must be determined beforehand.

9. Taxes
- The codes need to be simplified. Too much wasted time is spent trying to figure them out, follow them, or trying to take advantage of them. We have better things to do with our time. Congress owes it to the public to K.I.S.S. I will ask Congress to begin hearings on overhauling the code once I have formed the aforementioned Unintended Consequences department. I will want to know who benefits from any change lest the process is hijacked.

10. Area 51
- I will seek to reveal if the U.S. gov’t has any real knowledge on such topics as aliens or the supernatural and share it with the public unless it will do more harm than good. I’m sure most can handle the truth, but until warning labels on products don’t need to tell people to avoid using electric devices in the bathtub or while sleeping I’d rather play it safe.

11. Borders
- OH BOY! BORDERS! TRIGGER WARNING! TRIGGER WARNING! It seems obvious as a student of history that a country should and must control its border. That little line on a map represents, or is supposed to, a real thing. Of course, borders are not tangible like a rock or an I Brake for Unicorns bumper sticker. They are an idea – more on that later. And yet, it is a very real place marking where one area of private property (simplifying here) meets another area of private property. Then, within this larger area are the smaller pockets of private property where you and I live. And here’s where I see the point many people are missing or ignoring or are hypocrites. YOU lock your car. YOU lock your windows. YOU lock your door. YOU try to control, as you should and must, who comes into your private property in order to safeguard yourself, your family, and your property. I would wager even those who don’t lock their doors at least close them. If it is okay for YOU to try and secure your surroundings -even your mental surroundings with Safe Zones and Safe Spaces - why can’t your country? Think about that in the context of the current political atmosphere because here’s the BORDER I am actually talking about. “Secure border” has come to equal racism to many people, but are you a racist for locking your door? Of course not! And yet the political class on both sides has spun the discussion to control the conversation on this and MANY OTHER TOPICS. Look, the deeper we fall into the political trap of avoiding difficult subjects or ideas through name calling, character assassination, and blame shifting the longer problems go without solutions. AND THAT’S THE REAL BORDER PROBLEM WE’RE ALL FACING. Selective outrage has been monetized to new heights, while righteous hypocrisy is being culturally weaponized. And too many of We The People eat...it...up.


We need to tear down the borders the political class is erecting around us, my fellow Americans. Perhaps you’ve noticed that oh so very unsubtle theme behind most of what I’ve written here. We need to be able to talk to each other like adults and not butthurt kids. If elected President (yeah, right) I will do my best to help make this happen. Period. 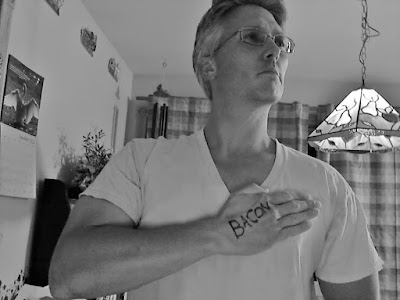 I am Sam Girdich and I approve this message.