Just sent an email to the NYS Board of Elections to make sure I am PROPERLY writing myself in for President this year. Which, incidentally, will mark the third Presidential election that I write my OWN name in. I know me and I know I actually care about me!

In the meantime I will complete the FEC Form 2 for proper filing in case you want to write me in.  Nothing formal being announced here, of course. Nope. Just saying.

Here are some notable other candidates for this year's election according to http://www.fec.gov/press/resources/2016presidential_form2nm.shtml. Mind you, these are REAL (no joke) filings for individuals under the Federal Election Commission. There are HUNDREDS of names, most of which I'm sure are legit. This is but a small sampling of the ones that caught my eye:

---and a few others I won't list because even I have standards.

Every election is important so I seriously hope you vote for whomever you want to. Nothing gets the Establishment's attention and ear more than a large voter turn out.

I probably should check out Dat Ass before I finalize my vote. Yeah. That sounds like a plan.


UPDATE: I completed the FEC Form 2 online. I think I filled it out correctly and I received the auto-reply it was received so I take that as a good sign. The form has to be submitted two weeks before a candidate announces so I will take the next two weeks with my advisors, Illuminati backers, and the ghost of Al Lewis deciding on my next step.

UPDATE #2: NYS forms printed, signed, notarized, and faxed to the Board of Elections. I have the confirmation it was received so I should be good. Mind you there are 802 pages of election law so who knows for sure. Oh yeah. This is for real.... 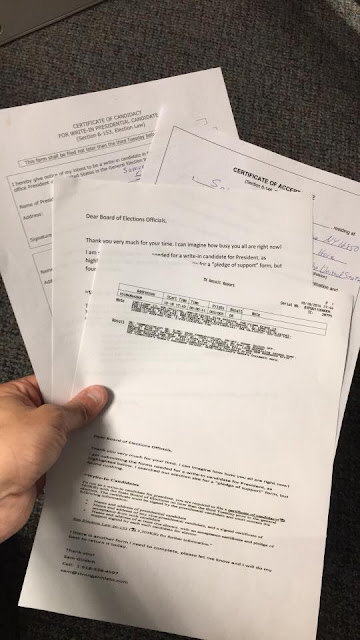 UPDATE #3: I am officially on the books, per the Federal Election Committee, for your write-in vote for President of the United States.I think that's pretty cool!

I checked NY State's Election site and I do NOT show up on the list posted, as found here http://www.elections.ny.gov:8080/reports/rwservlet?cmdkey=Candidat_32. As far as I can tell the reason is that I did not identify with a State recognized party. There is a list of names under Working Families, Women's Equality, and Libertarian for example, but NO names listed as simply Independent, like I did on the Federal form. There is a considerable list of names under Democrat and Republican, which is curious because the last time I checked we already know who their candidates are. So how can the State list someone as running for President for a party that already has a declared candidate? Good question. As long as you list a State recognized party it appears that you are good to go. I wrote my party name as The Insert Name Here Party because listing any other name would have been A. a lie, and B. a lie. If there was another reason, damned if I can figure it out. So, being honest worked against(?) me in New York. Interesting...very interesting...

Here's what I think is the final outcome of this. My votes should count for the popular vote, but not for my State’s delegates to the Electoral College. Or, perhaps next time I may have to register in each state which requires it? Not sure, really. Being a write-in candidate is nebulous and I don’t think the State or Federal give it much thought from what I’ve discovered over the last few weeks. The two parties have crafted a cyclopean labyrinth filled with charnel pits and unnamable monsters lurking around every tenebrous corner. Heh. Well, maybe not quite that bad. However, if I, or anyone else, did somehow manage to secure a large number of votes the Old Powers would rain lawyers down upon our heads with great fury and anger. And this, you know to be True.

UPDATE #4: Platform Items. Here are some of the important topics affecting YOU that I will tackle if elected.  CLICK HERE!